Edit your videos
in a fraction of the time.

with just a few clicks.

Only  $ 99 Only
$ 99
$ 89
One-time purchase · No subscription
$10 off
Buy for Mac
Download Free Trial
Success! Now check your email.
Success! Now check your email.
Want to help out?
Back at your computer, use this link:
👉getrecut.com/👈
That way they'll get credit for the sale  🙌
got you a discount!
👉getrecut.com/👈
Good for $10 off, applied automatically.

I absolutely LOVE Recut! I've been creating Youtube videos for over a year, and half of my time editing is spent doing the tedious things like editing out the silence / breaths between words. This was easily the best $100 I've ever spent.

One of the reasons I've not been in a rush to find an editor is because of Recut. It's one of the few things that has honestly been a game changer for me when it comes to Youtube.

I bought this in a heartbeat. It's going to save so much time editing screencasts.

Such a smart, simple app.

Thank you a MILLION for writing Recut. This is a tool that, after using it once, I would have paid $100 just for that one time. Thank you so much for developing and doing it well.

This tool REVOLUTIONIZES how I'm able to not only edit videos, but conceive and record them since it frees me up to not worry about dead time or bad takes. It paid for itself after one use. It’s stupid easy to use and is enabling me to produce more content, faster, and easier.

f me this is incredible

See how it works

Even after all the time planning and recording, you know you're in for a few more hours of tedious editing.

If you're like many screencasters, YouTubers, and course creators I know, a big chunk of that time is spent slicing out the silent parts.

These all help quite a bit! But even with these tricks up your sleeve, removing silence is still a manual slog.

Recut finds silence and deletes it, so you can spend less time doing tedious editing.

Here it is in its natural habitat, cutting a 10 minute recording down to 5:22.

Hit Play and immediately hear how it sounds, skipping over the silent parts, without waiting for an export.

Recut works on audio files too, so you can import your podcasts (or long lecture recordings) and cut out all the pauses with a few clicks.

A quick click + Delete will remove any audible parts that you wish didn't exist.

If you have some important silent parts – like showing something on screen, or pausing for dramatic effect – you can tell Recut to keep them.

Tweak the "padding" between cuts to give your words a little breathing room, or cram it together withzerobreaksbetweenwords if you want.

The nondestructive export is perfect when you have more editing to do after the silence is gone. 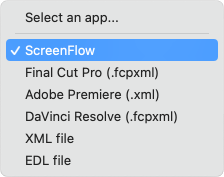 You can export a new video or audio file right from Recut – without modifying your original.