Manually cutting out silence from videos takes forever. It's probably one of the most time consuming and tedious parts of video editing. Same goes for editing screencasts or podcasts.

Fiddling with the gaps to get the audio to sound right is especially annoying! It's a pain to get them juuust right so it sounds natural.

It seems like a thing that Final Cut Pro should be able to do! Logic has a Remove Silence feature but it hasn't been ported to Final Cut.

Since there's no built-in tool for this, we created one to strip out the silence for you.

Recut is a "pre-editor" that can remove the silence and export a cut list that you can import straight into Final Cut Pro. 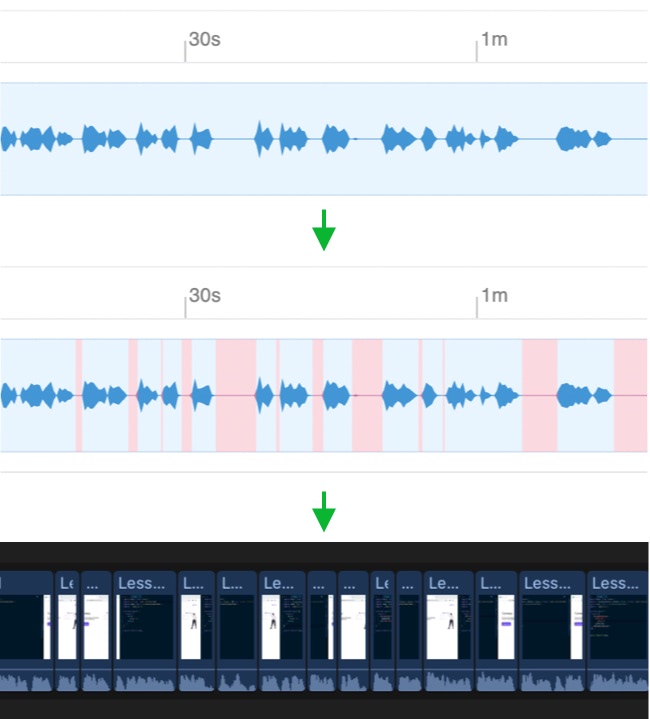 Here's how it works:

No Need to Learn a New Editor

If you use Final Cut Pro — or any editor for that matter! — you probably remember the learning curve. Or maybe you're still climbing it.

Recut works with your existing editor so you don't have to learn a whole new one. It's intentionally designed to save you time and get out of the way ASAP.

It previously took me about an hour to cut down the raw footage... incredibly tedious to cut out things like pauses. Recut does this with a click of a button and my A roll cut time now is about 10 minutes and it's seamless.

There are minimal knobs to tweak, and it pretty much just does its thing, quietly saving you hours of your life :)

You can spend more time creating content and growing your audience (or sipping margaritas) and less time doing editing work that the computer can do for you.

Download the fully functional free Recut trial here (no email or credit card required) and see how it fits with your workflow!