Here are the top 5 TimeBolt alternatives you should take a look at:

Instead of going into what each app has to offer, we'll focus on why you should take a closer look at Recut as the best of the options.

Why should you choose Recut over TimeBolt?

Recut is the most similar to TimeBolt in terms of workflow and features. It works on both Mac and Windows. 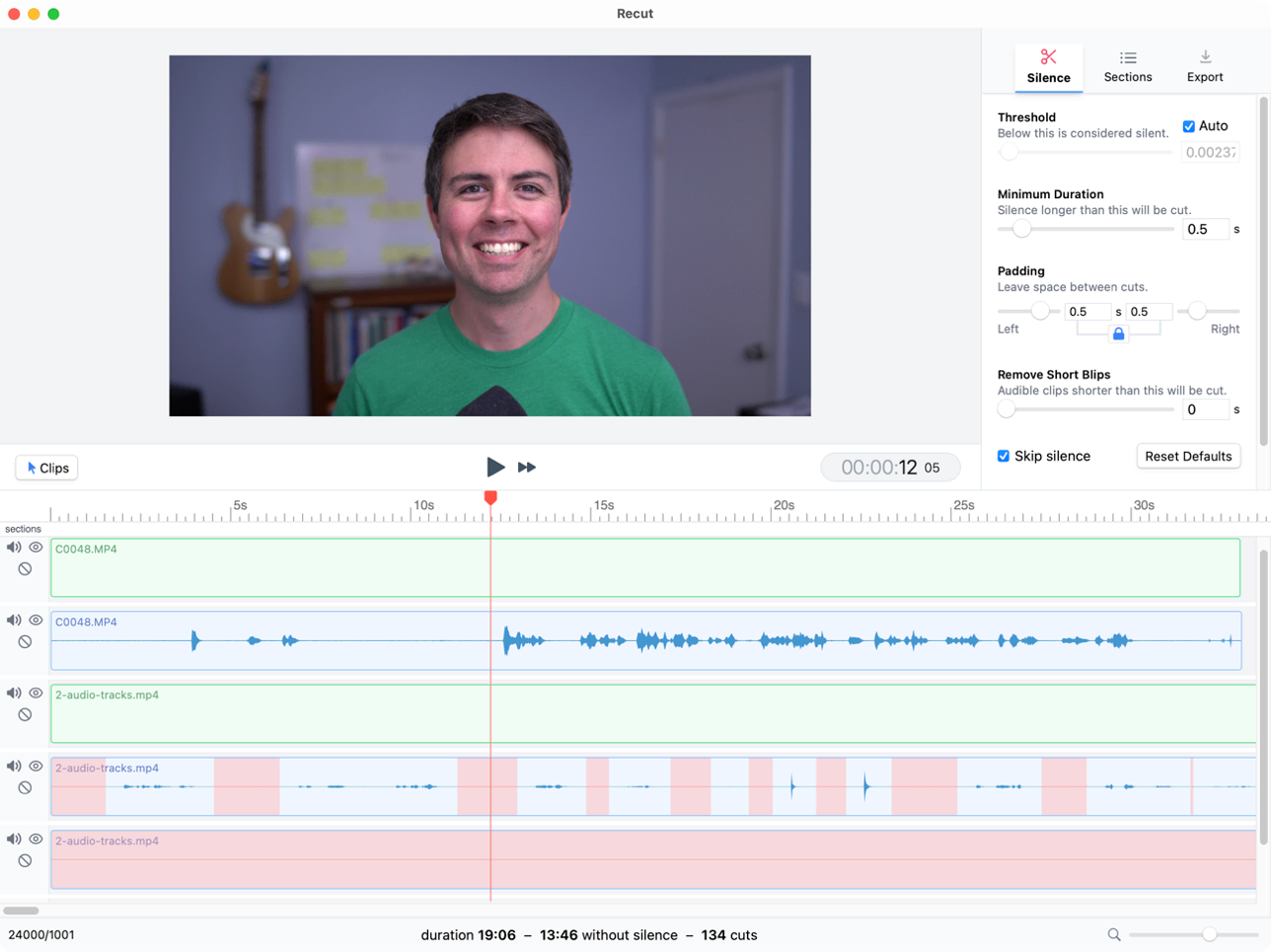 Compared to TimeBolt, Recut has some advantages:

First, it looks and works more like the editors you might be used to, so you can quickly get going.

It's also much faster – in my testing on a 20min recording, Recut was 6x faster: it only took 1.2 seconds to read the audio and find the silence. TimeBolt took 7.4 seconds just to read the audio.

Recut also works with files of any length (without splitting it into chunks).

Better still, it responds immediately when you change the settings, instead of pausing to reprocess the audio.

The timeline zooms in and out smoothly, so you can get a close look at the waveforms or get a birds-eye view of the whole composition.

Remove silence with multiple tracks, or an external mic

If you have multicam footage, or use an external mic, Recut can work with that easily. Drag the files in and they stack up as tracks on the timeline.

It will keep them in perfect sync as it cuts across every track at once.

You can also "ignore" any of the audio tracks, if you don't want to cut based on their audio. The ignored tracks will play back normally and you'll hear them, but when Recut detects the pauses, it won't look at the audio of the ignored tracks.

Like TimeBolt, you can easily add a background music track. Instead of a special Background Music button though, you just drag the file onto the timeline.

Import the cuts into your favorite editor

It can export XML and FCPXML files to Adobe Premiere, DaVinci Resolve, and Final Cut Pro.

From experimenting with both tools, Recut does a better job than TimeBolt with creating XML/FCPXML files that work with other editors. It handles all the common framerates perfectly (25, 23.976, 29.97, 30, and so on) and works with all major cameras. (And if you ever find one that doesn't work, just reach out to support and we'll get it fixed up)

Recut is a one-time purchase for $99, which comes with 1 year of free updates. After that, you can optionally buy a 1-year pack of updates. This doesn't auto-renew, and you can keep using the app forever after the initial purchase. So overall Recut is more affordable than TimeBolt.

Things Recut can't do (yet)

Now, I made the app so I'm obviously biased! But I'm not afraid to say it has some shortcomings too.

There are also a few things Recut can't do yet, like:

I'm always working to improve the app, so if you hit an error or need help with anything, please do get in touch and I'd be happy to help :)

Learn more about Recut here and download the trial. It's fully functional for 5 exports, so you can try it out with a few of your own recordings.